ChoWol was a fascinating village and enormous in size.  To give you an idea of the size of that village, when it was closed, sadly it was replaced by a country club.

As you entered ChoWol village, on the right were a couple of homes and workshop buildings including a long low gray studio with a number of large windows.  Outside, in front of the buildings, was an enormous clay field approximately the size of a tennis court.  It was at least 6 times larger than my illustration below.

At one end of the field were a couple of mounds of earth, each about eight feet tall, composed of different types of clay and perhaps feldspar.  These earths had been dig by hand the winter before when they were frozen and easier to dig.   The earths were now in small chunks similar to mounds of dirt. 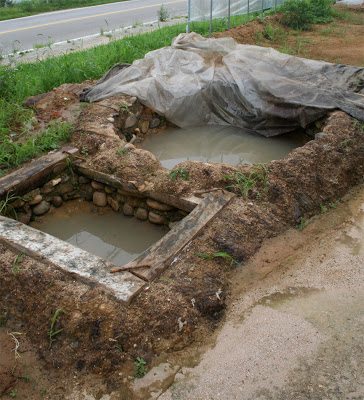 Next to them was a small shallow pit into which these earths were shoveled in loosely measured amounts from each of the mounds through a large course sieve to remove stones and twigs.  (See the above image.  Those at ChoWol were larger in size.)  The shallow square pit was a place for the clay to be mixed with water and worked into a slurry.  Then the slurry was ladled through another finer sieve into a deep cone shaped pit.  That cone shaped pit was about 6 ft deep and about 4 ft across.  Into this pit more water was added and the heavier materials, such as smaller stones sank to the bottom.  Watery clay slip from this deep pit was ladled through a finer sieve onto the field. 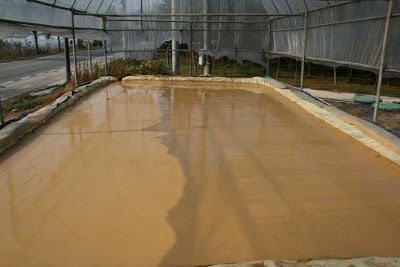 The field had walls that contained the slip.  After ladling enough slip that almost like water spread across the field, the slip simply sat there until enough water evaporated from the clay for it to eventually form cracks.

This water process produced very strong and very plastic clay.  No sand or grog was added.  Although the clay cracked in the open air, it remained very plastic similar to the bagged clay many of you purchase to make your ware – perhaps a little softer.  Today, many onggi potters use filter presses to achieve clay of similar quality.  The long water process is the secret to onggi’s plasticity.

On this day, the clay field was filled with cracked clay about 8 inches or 20 cm thick.  One of the workers was loading large chunks of these clay pieces, each weighing about 25 lbs or 11 kg, into a cart to be pushed into the studio.  Once in the studio these chunks of clay where unloaded eventually creating a large circular pile about 4 ft or 122 cm tall and across.  A “clay boy” (that is what they called the workers) pounded each block of clay into this mound with a large mallet like hammer, blow after blow after blow seemingly all day long. 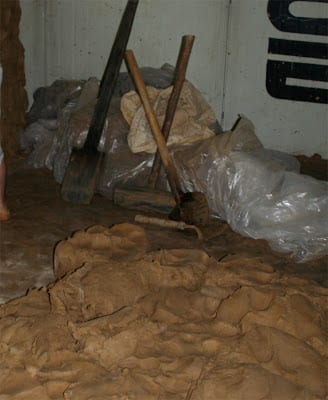 Not far from that mound was another pile of similar size that had already been compressed by pounding.  At that mound another clay boy was using an adz-like tool to shave clay from the mound. 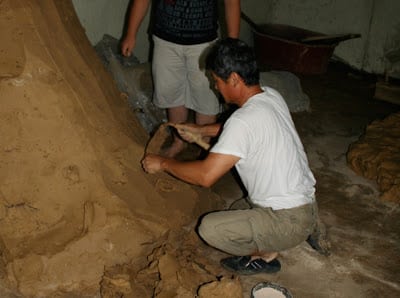 These shavings were rolled into a ball and hand pounded onto the clay floor into blocks of clay each weighing about 12 lb or 5.5 kg before they were made into coils for the forming of the work.

The coil forming process is fascinating.  The block of clay is ‘squared’ again by lifting and pounding it onto the clay floor many times.  Slowly this cube is elongated by continuing the lifting and flopping process. The clay is now about 3 to 4 feet long  and about 3 in sq.  It is still flat on 4 sides. 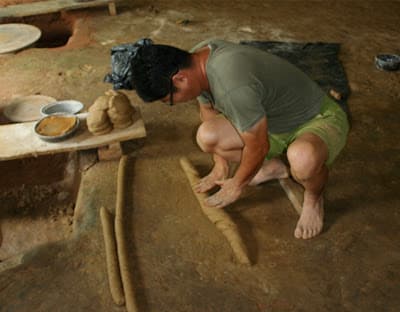 Now it is twist rolled into a coil.  Above, Kim Chang Ho demonstrates this stage of the process.  Then the coil is further stretched by lifting and flopping.  The clay arches into the air time after time as the coil slowly reaches the length and diameter desired, usually about 2.5 in.

I won’t try to describe the beginning or later forming  processes but suggest that you visit Adam Field’s YouTube videos.  Click the links  to go and the back button to return to this site.  (Thanks Adam for permission to make these links.)

Immediately after each jar was formed it was lifted and carried out in to the drying area to stiffen before glazing. 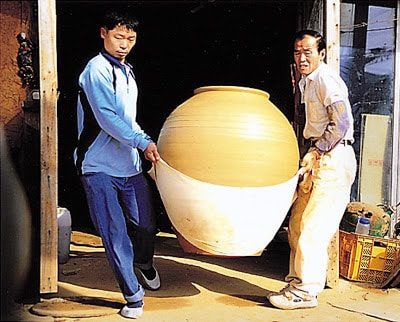 Glazing was done while the work was leather hard in a large tub filled with glaze.  The jars were set on their sides into the glaze.  Some glaze is allowed to flow into the jar and if necessary additional small amounts of glaze were splashed into the jar and the jar was rolled in the glaze thus coating all sides in and out.  Then the jar was lifted up onto its lip, the glaze inside poured out and the bottom simply wiped with the hand to remove the excess glaze. ( Click the Glazing link.)

The Korean onggi glaze is a combination of clay, ashes and “lye”.  Interestingly, the early American southern stoneware ‘alkaline’ glazes are a very similar formula using some form of silica as the third ingredient.  That glaze was brought to America from China by missionaries.

The ChoWol village had two or three enormous dragon kilns each at least 100 ft or 30 meters long into which these jars were placed for firing.  They fired them seven or eight days slowly drying the ware before raising the temperature. 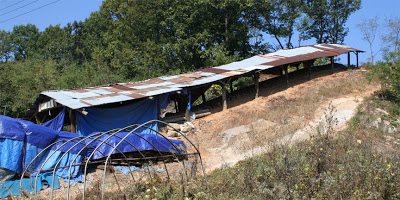 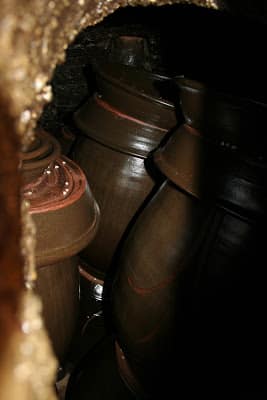 A look inside the kiln

There is nothing like a good onggi woodfiring. I will be posting a video shortly on the firing of an onggi kiln 90 years ago. You will be amazed, especially when you compare that firing to this one videoed by Adam. 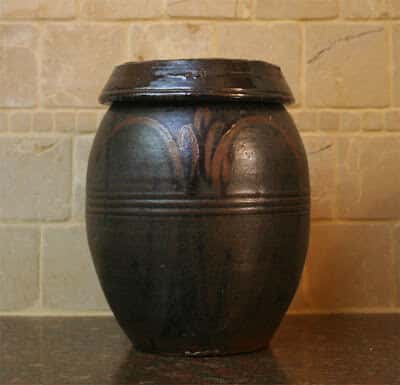 The image above is of my onggi jar made at the ChoWol Onggi Village.  In some ways it is not typical of the work produced there.  I chose this jar because it was both matte in surface and dark in color.  Many of the jars produced there were slightly lighter and shiny.  The lid is also dark but more shiny.  I really like the strong direct finger marks on this jar.  It is a prized possession.

The ChoWol Onggi Village is now nothing but a fading memory of a great onggi village.  Fortunately with it onggi didn’t also fade from Korea.  That is something we feared when we heard of the passing of ChoWol.

While onggi is not as strong as it was thirty years ago when we could drive out into the country and find many onggi potters.  Onggi in Korea is very much alive and well.