As those of you who have viewed this blog before can see, I changed the heading image on this blog to an image taken from the image below.  I made that change to give you a better idea of where the teas we sell from Hwagae Valley really come from. 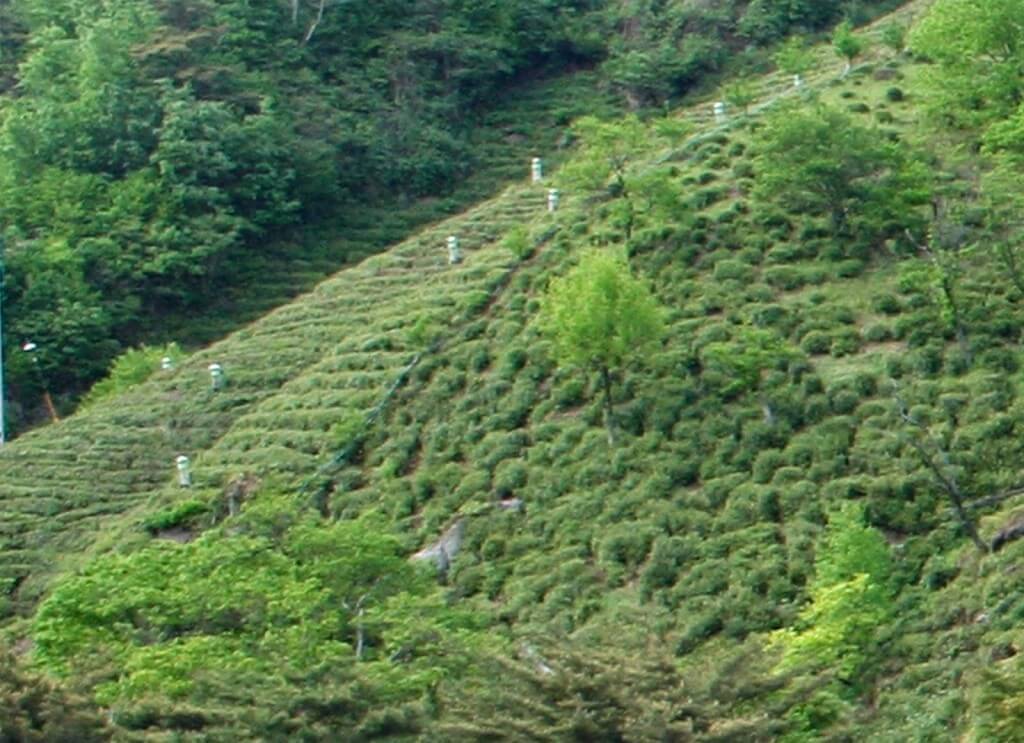 On the left of this image semi-wild tea is growing.  The bushes were grown from seeds that came from wild tea bushes.  These semi-wild bushes were planted in rows for easier picking.  Look closely and you will see what appears to be white posts scattered across the field.  Those ‘posts’ are actually ‘insect collectors’ used to avoid the need for insecticides.  No insecticides are used and essentially no fertilizer that would cause the roots to spread.  While these plants are growing in an organized manner, they are left to grow ‘wild’ or naturally in the same way as their ‘parents’ the wild bushes seen on the right. Thus they are referred to as ‘semi-wild’.  On the right of the semi-wild bushes are tea plants growing around the trees and up the hillside.  They are wild tea bushes descendants of the first tea seeds planted not far from this spot in 828 CE.

The tea bushes on Jirisan and beyond are known as ‘Hadong’ cultivar tea bushes.  Connoisseurs of Korean tea will tell you that the very best tea comes from this type of wild bush followed by their children the semi-wild bushes. 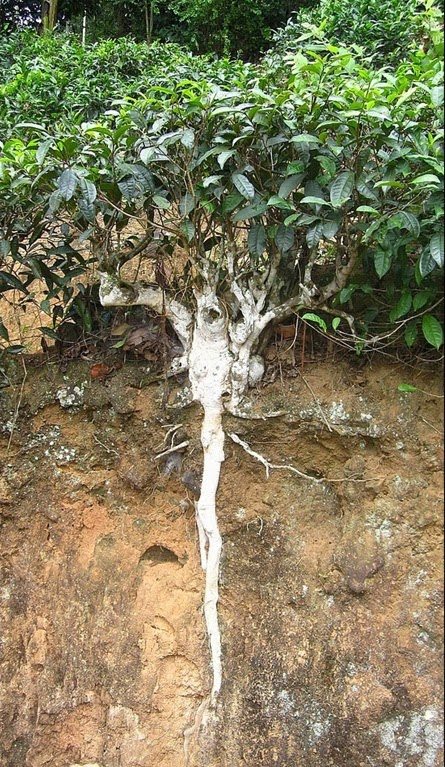 In both cases the roots grow deep into the earth and therefore absorb the ‘energy’ or Qi Cha from the earth.  Actually, Korean tea connoisseurs will tell you that the very best tea from this type of bush is from wild tea leaves growing in a bamboo forest where the morning dew from the bamboo provides special nourishment and moisture to the wild tea plants. 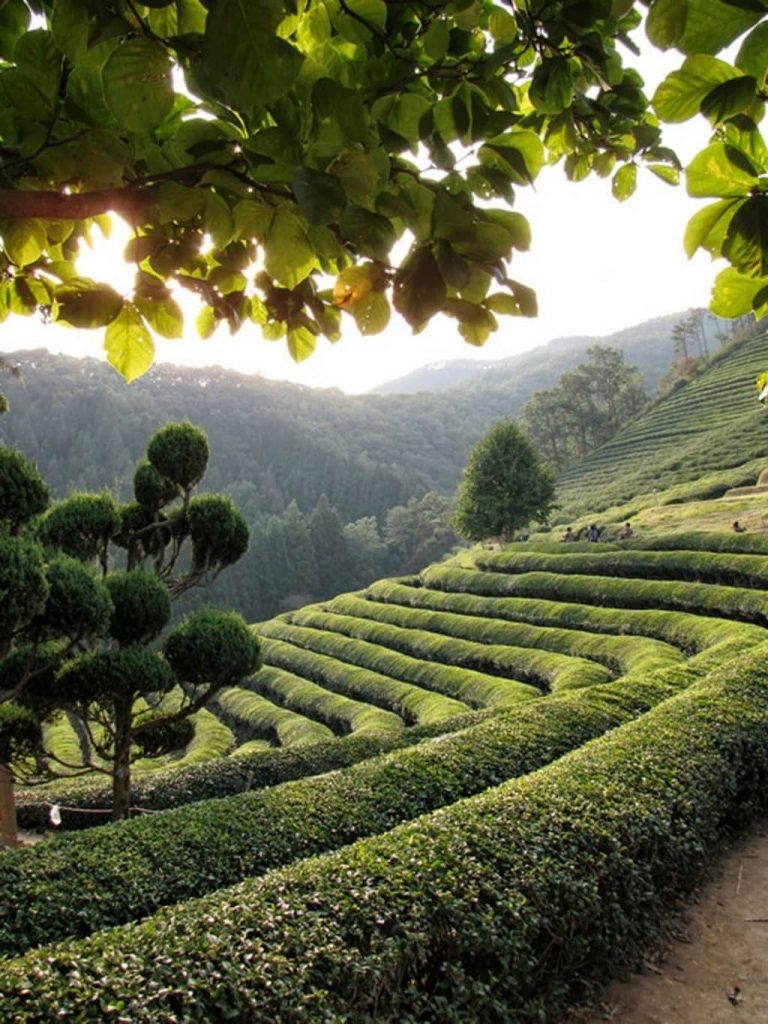 By contrast we now go to Boseong where during the Japanese occupation the Japanese tea cultivar Yabukita was planted.  I have read that the Japanese were looking for a place to grow tealeaves for hongcha or red (black) tea when they planted these bushes in Korea.  Today they produce primarily green tea.  After the Japanese occupation, Koreans eventually took over those tea fields and developed beautiful cultivated fields.  Here, I have been told, fertilizers are used and in with some growers very small amounts insecticides.
After further research into this question, I discovered that only a few tea producers in the Boseong area use chemical fertilizers and insecticides and that a number of producers there are now growing their teas organically as they are in Hwagae Valley and Jerisan.

There is no doubt which bushes are more beautiful.  The sweeping Boseong tea fields can’t be matched for pure beauty.  Many movies have been made highlighting these bushes.

However, as in many things, the outside beauty should not influence your judgment of true character. Beautiful bushes do not necessarily produce the most delicious teas.  While there are excellent tea producers in the Boseong area (and I’ll be bogging about one soon) if you are looking for authentic completely Korea tea, you would not choose Boseong as your only destination.  The key to great tea like great people doesn’t lie in their outward appearance.

Likewise, Hwagae Valley should not be your only stop for wild and semi wild tea bushes.  Dotted across the southern tier of Korea, from the east coast to the west coast, wild and semi-wild tea bushes can be found.  Many independent tea growers have replanted those wild Hadong cultivar seeds in rows, often like small gardens behind their homes or even in large green houses to create personal semi-wild bushes for easier picking and to make their personal tea.

What might picking tealeaves be like?  Before I look further at this topic, I have to note that I will not be referencing the books The Korean Way of Tea or Korean Tea Classics for historical notes on picking.  Rather I simply want to give you a sense of what the pickers are experiencing. 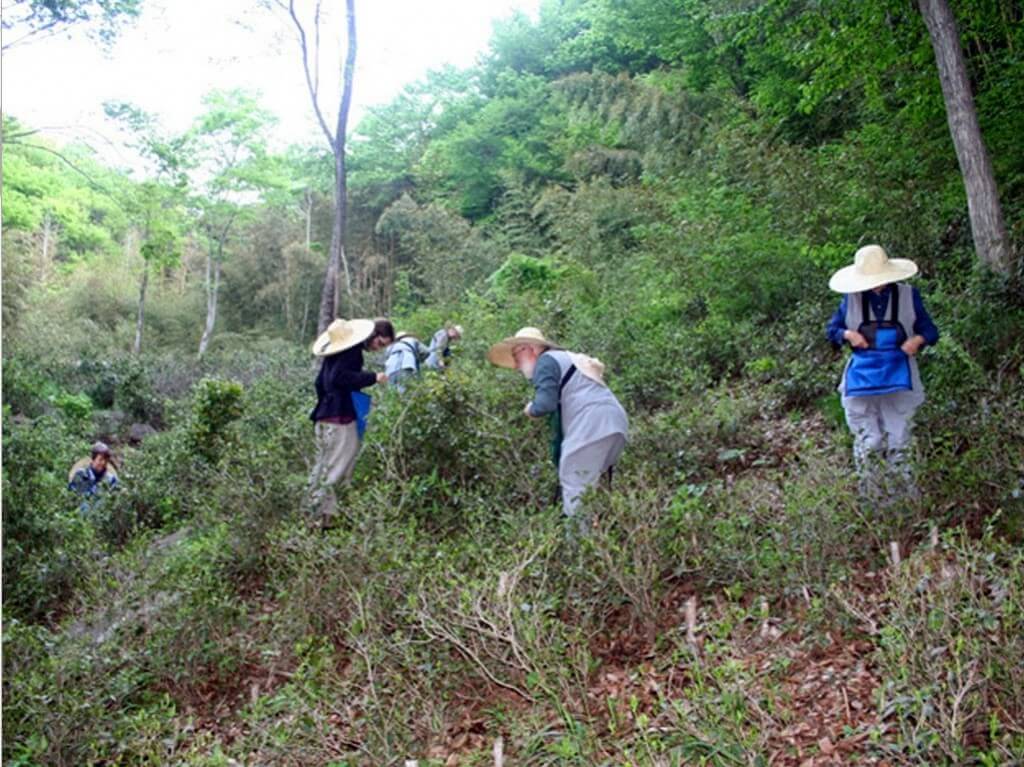 Here is our group on Tea Tour Korea 2011 picking tea behind Hwaom-sa and the Hall of Gucheung-am in a very rugged wild tea field where the bamboo had been recently cut to ‘prevent fire’.  But the bushes, some several centuries old, now often suffer from drought and to quote Brother Anthony, “Snakes seem happy to frequent their roots.”  The hill is steep and footing rugged and very uneven.  We nearly had a disaster when one of our members fell landing between pointed bamboo stakes.  After 2+ hours of hard picking our group of 10 pickers had just this amount of tea to show for our work.  I spoke to one of the members of that group .  When I told him that I was writing a post on picking, he said, “Don’t forget to tell them the picking was excruciating.” 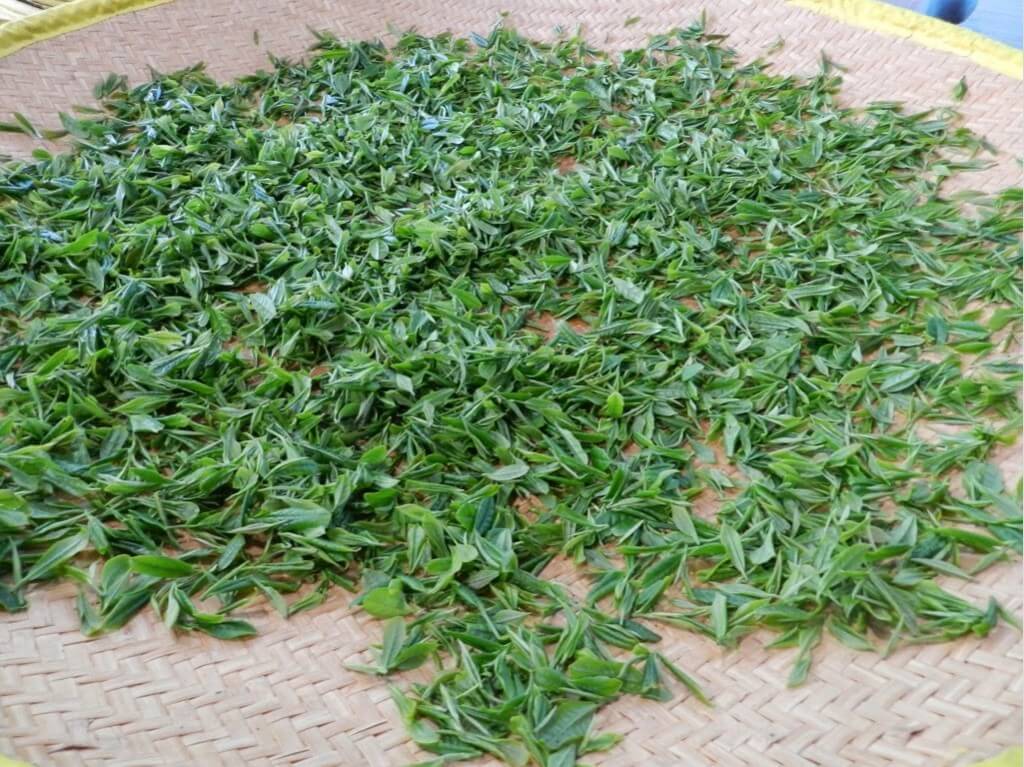 It was a remarkable experience but we won’t be picking there again.  Hwaomsa a beautiful place to visit, lying among thick woodlands on the western slopes of Jiri-san near Gurye-gu.  It is one of the first places where tea was planted in Korea.  Had they not cut the bamboo, that tea would have been called juk-no-cha 竹露茶 (bamboo-dew tea). To find authentic juk-no-cha 竹露茶 (bamboo-dew tea) we visited the artisan tea producer Ha Gu. 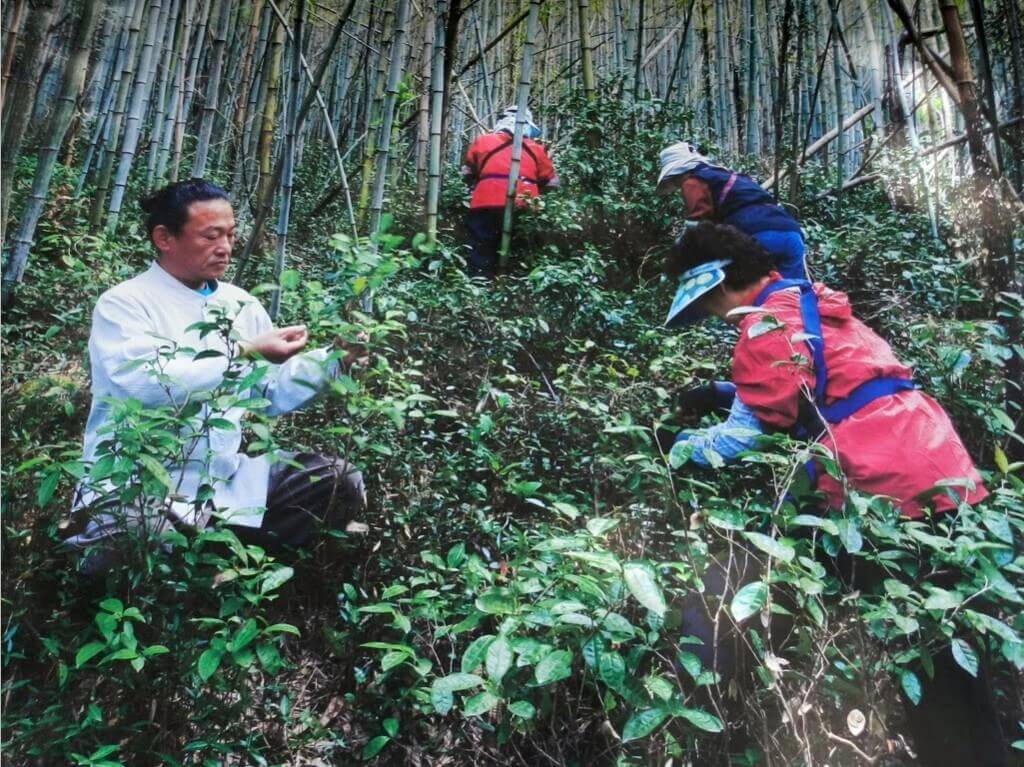 Ha Gu makes delicious tealeaves picked from wild bushes growing under bamboo and processed by hand but the teas demand a much higher price that other artisan producers. 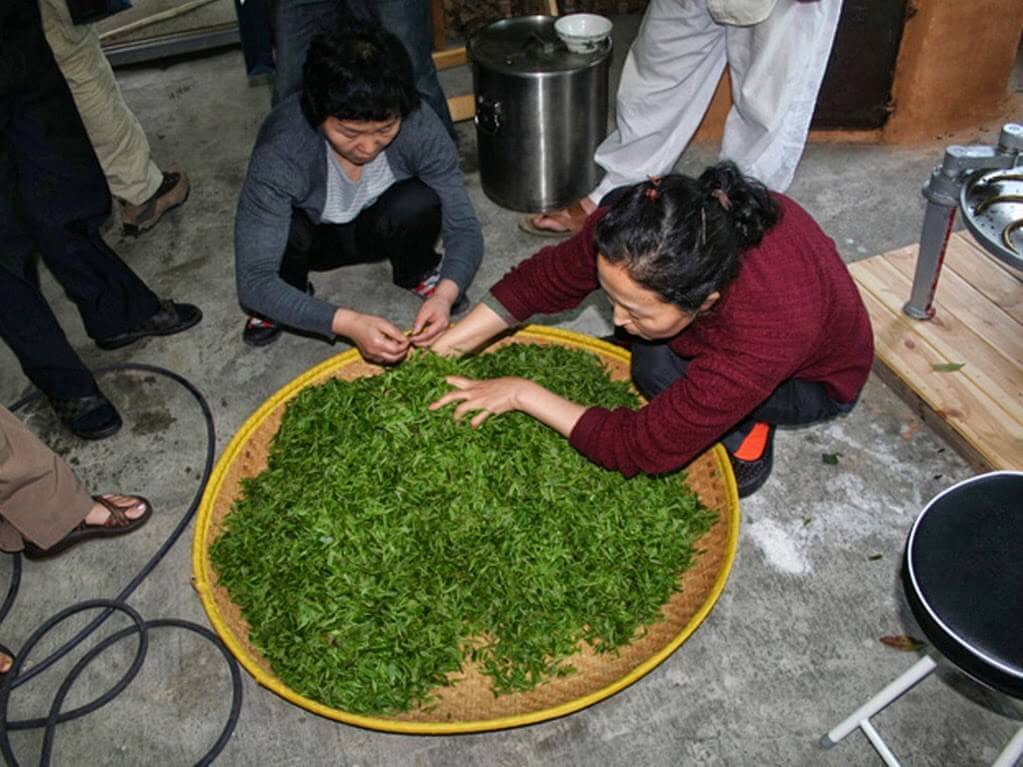 Fourteen professional pickers, working for Ha Gu, took four hours of hard picking, in rough steep terrain, to gather just this amount of tea.  It is about 6 or 7 times more leaves than we amateur pickers gathered but when you realize how much tea shrinks in the drying process. This is still not much tea.  Simply put picking wild tea is difficult and sometimes dangerous work.

What are tea pickers looking for?  This is what they see: 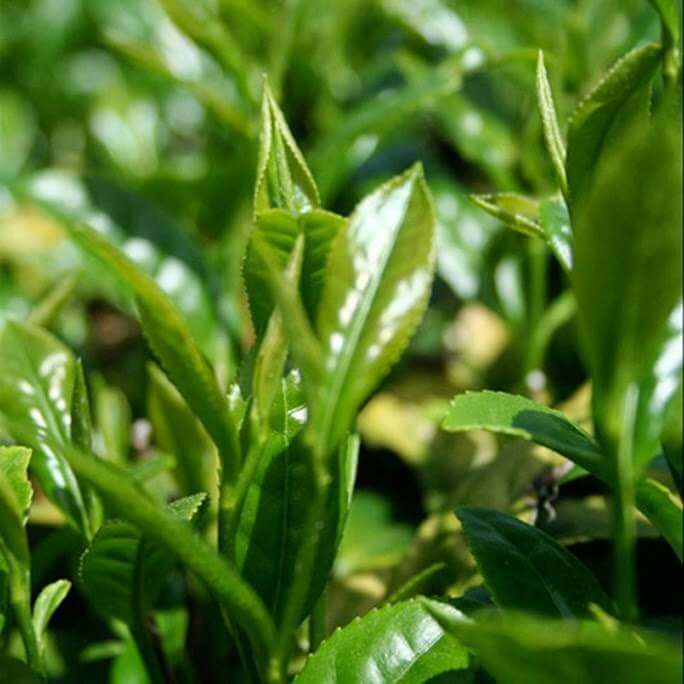 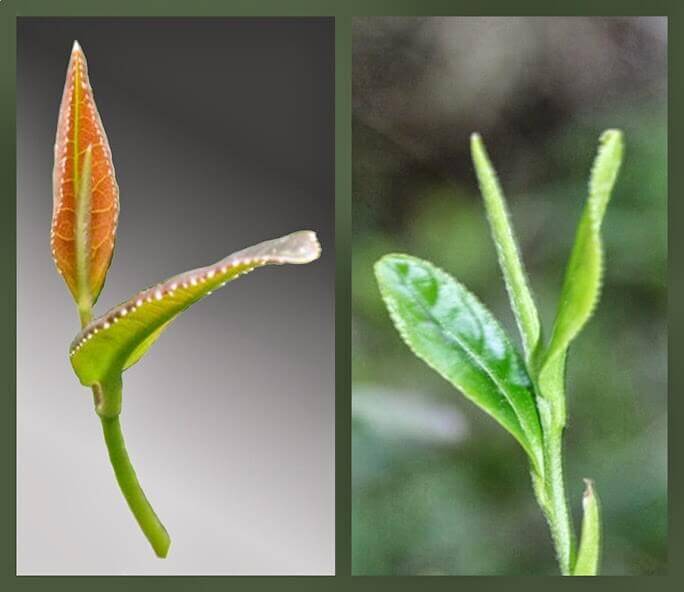 . . . just the three lead leaves.  The leaves on the left are what is know as ja soon cha or ‘purple tea leaves’ even though these particular leaves are more orange, the top of the larger leaf does have a purple tint.  This is caused by cold nights and warmer days resulting in the need for phosphorous.  But these are wild or semi-wild organic bushes so they will not be adding phosphorous and the pickers like these ja soon cha leaves in any case.  The leaves on the right illustrate more common leaves and were picked right after the image was taken.   I should say the leaves were “plucked”.  “Don’t use your fingernails to cut the stem.  That will interrupt the flow of juices and qi.”  We were asked to simply grasp the stem and pull i.e. ‘pluck’ the leaves.

There is little wonder why tea farmers from those with small gardens to commercial producers have planted tea bushes in rows for easier plucking. 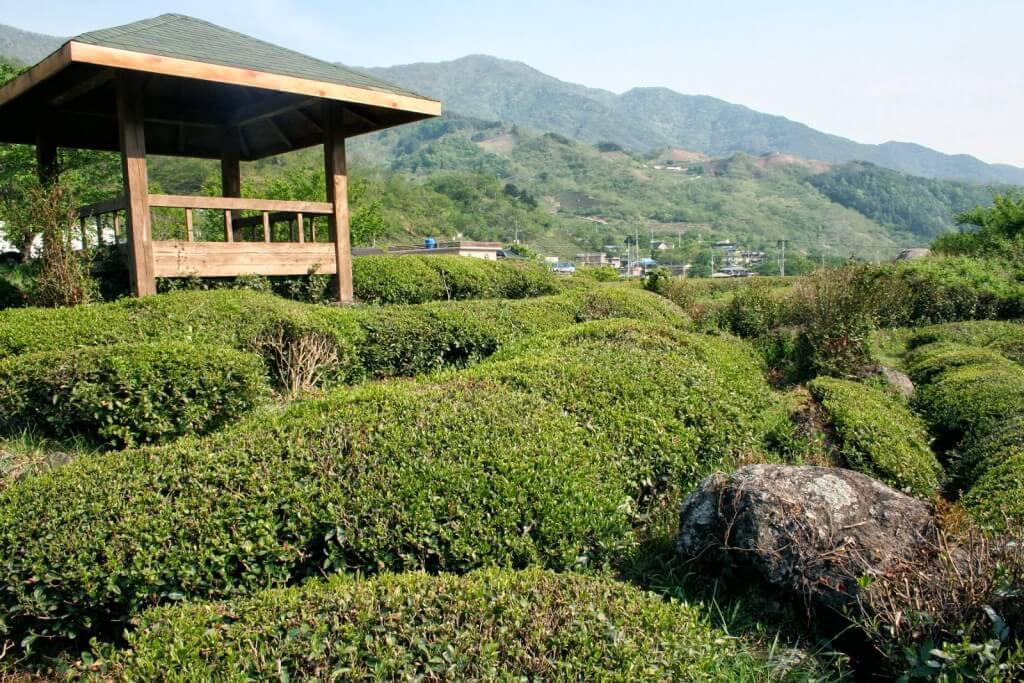 While these organized bushes behind Dong Cheon Tea may look similar in form to Boseong bushes, these are semi-wild bushes. 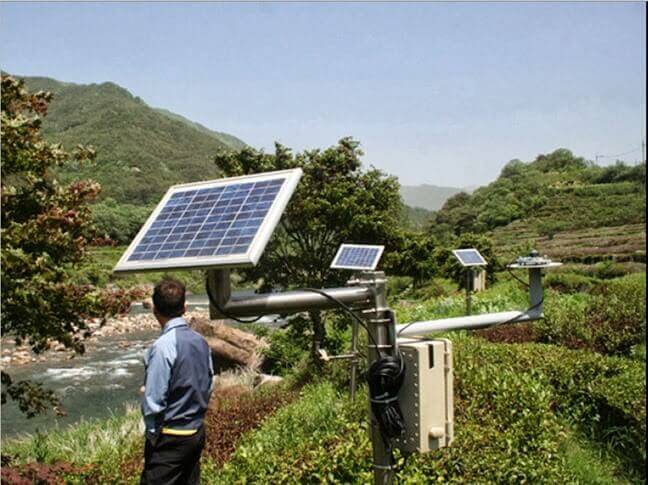 The bushes are cared for and monitored – yes – but these bushes are organically grown with no insecticides or chemical fertilizer – simply allowed to grow in the same manner as wild bushes.

Dong Cheon is a cooperative of about 80 tea farmers each growing tea using strict organic procedures.  Because the farms are scattered throughout the Hwagae Valley area, an area that can experience wide weather conditions, even after the harshest winter Dong Cheon Tea can continue to produce excellent teas.

Special Note:
To learn about Tea Tour Korea 2016 that will take place in May 2016 and host between 4 and 9 guests, contact us.  We already have some folks on that list. Contact us now.  There is no obligation.
Remember that although I have what some consider a nice logo and try to provide excellent Korean teas and tea ware I am not a big tea company.  I am just a potter and retired professor, trying to also promote Korean arts and culture.
If you have never tried any of our teas or bought any of our tea ware I hope that you will do so soon.  Search what independent tea blogs are saying about Dong Cheon Teas and Morning Crane Tea.  Then tell us about it for a special discount. Note also that we are now sourcing teas from a number of exceptional artisan tea producers.

Share on:
« Previous PostThe Death of Sen Rikyu and the Birth of a Teabowl Next Post »Picking Tea in Korea: Part 2