Have you read Part 1?

To continue our post, lets begin by visiting at a special tea producer in Boseong. 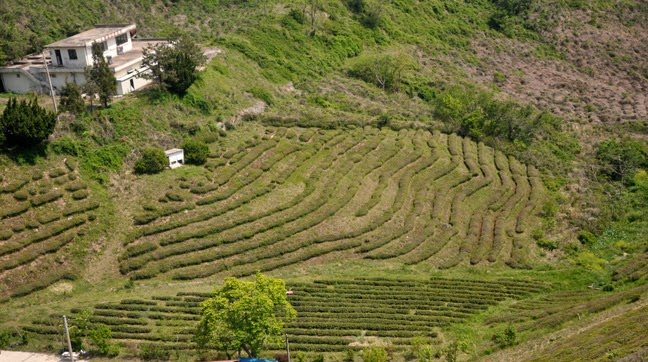 Kim Se Jin, the owner of Soa Tea is known for his exquisite teas.  His is the first tea plantation, perhaps in all of Korea, to be officially registered as organic in Korea, Japan, Europe and America.  However, our primary decision to offer his teas was based simply on their quality. 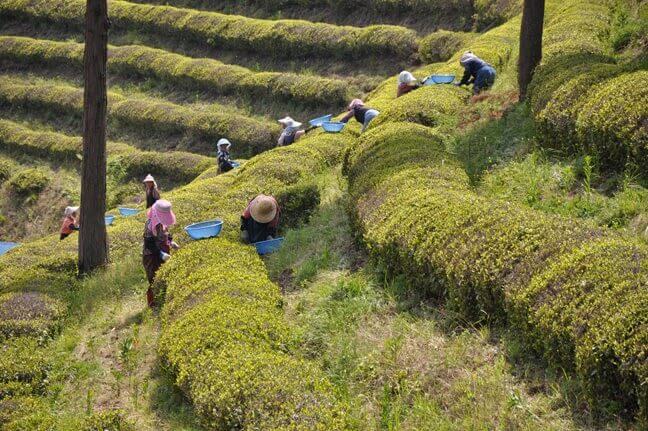 Soa teas are hand picked to maintain that quality.  But even here with cultivated bushes and wide paths between them, the footing is still uneven for the pickers. 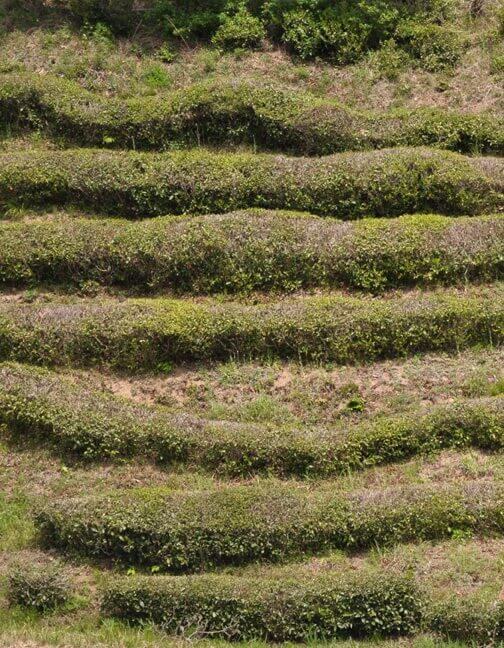 The line of bushes often takes the path of least resistance in the stony rough soil bending here and there to avoid very rocky terrain on steep paths.  Not all Boseong producers have absolutely gorgeous rows of tea bushes.  In addition, these bushes have had a hard winter.  Never the less even with less than beautiful organized bushes and tealeaves that have had a difficult winter, exceptional tea can be made by exceptional producers like Kim Se Jin at Soa Tea. 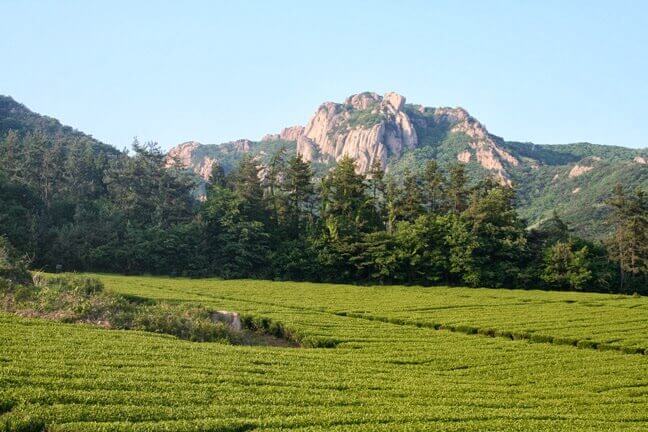 Not far away, near the village of Gangjin, the O’Sulloc Tea Company is growing their tea near a beautiful mountain.  O’Sulloc is owned by the Amore Pacific cosmetic company and much of their green tea is used for that purpose.  However their drinking teas, of many varieties, are well known and often admired.  Notice that the tops of the bushes are flat as compared to the rounded bushes found in Boseong and the wild and semi-wild bushes on Jirisan.

The flat top has two purposes and is sometimes used for hand picking as well.  First, it creates a ‘table’ for picking each new flush. 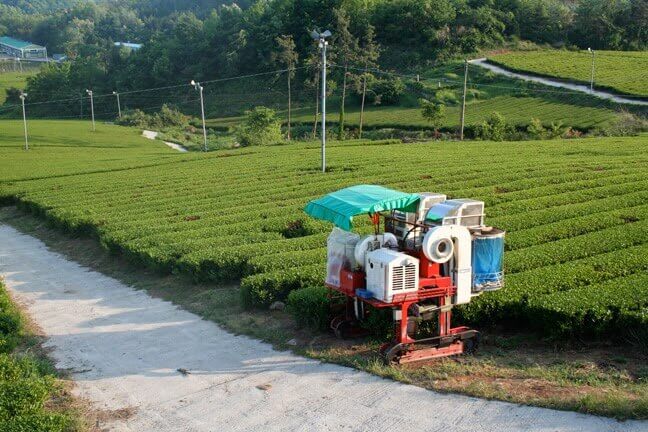 Second, the picking machine can easily slice the top layer of new growth leaves without getting into the thicker hard bush stems below.  Increasingly more sophisticated tea processing machines can separate the twigs, stems and even broken leaves and produce excellent teas.  Remember that the vast majority of teas from Japan and many other parts of the tea world are machine picked and processed.

The area of Gangjin is historically  famous for tea.  The Venerable Cho-Ui, Korea’s most famous tea monk, lived in this area.  Daeheunsa a temple near Haenam, a city close to Gangjin, was Cho Ui’s main home.  On Tea Tour 2015 our group will be staying at and making tea at this temple.  The area is also famous for its historic and current celadon including some really wonderful tea ware. 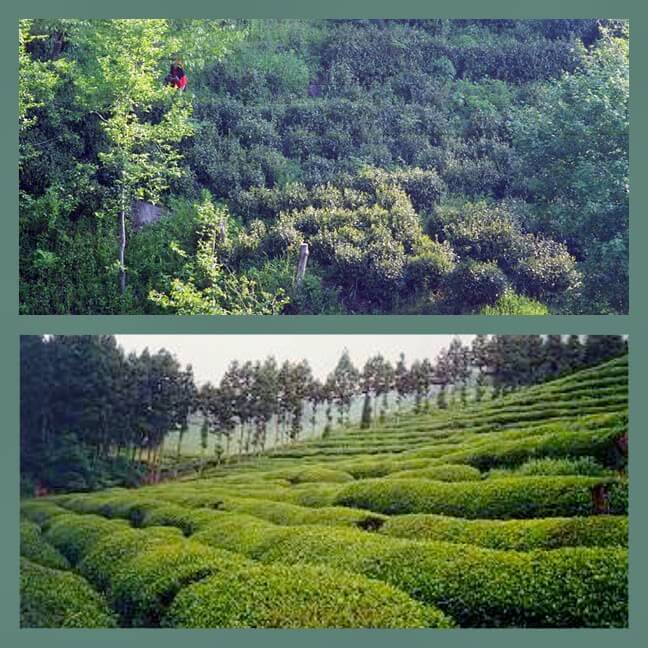 So which is it?  Do the wild and semi-wild bushes of Jerisan (top) produce better tea than the cultivated tea bushes of Boseong? (bottom)  That is for you to decide, because when it comes down to it taste is taste – personal.  But Korean tea connoisseurs believe so.

That is why we at Morning Crane Tea have selected mostly tea from Hadong cultivar semi-wild and wild bushes as our source for Korean teas.  More importantly we selected Dong Cheon Tea as our main source because this tea company simply makes excellent teas – teas that are competitive with even the finest artisan teas. The vast majority of our teas are Korean teas.  A tea must be very special to join the Morning Crane Tea family.

Hand picking is a long, hard and sometimes dangerous job.  It takes dedicated and knowledgeable people to do it.  But the rewards, when the tea is processed well, can be exceptional. 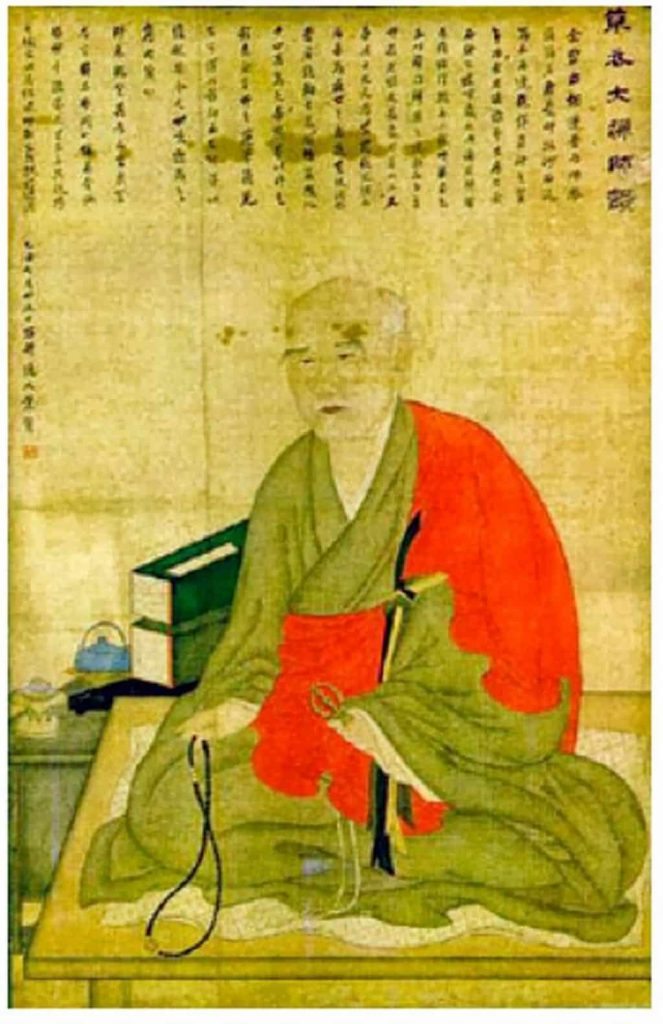 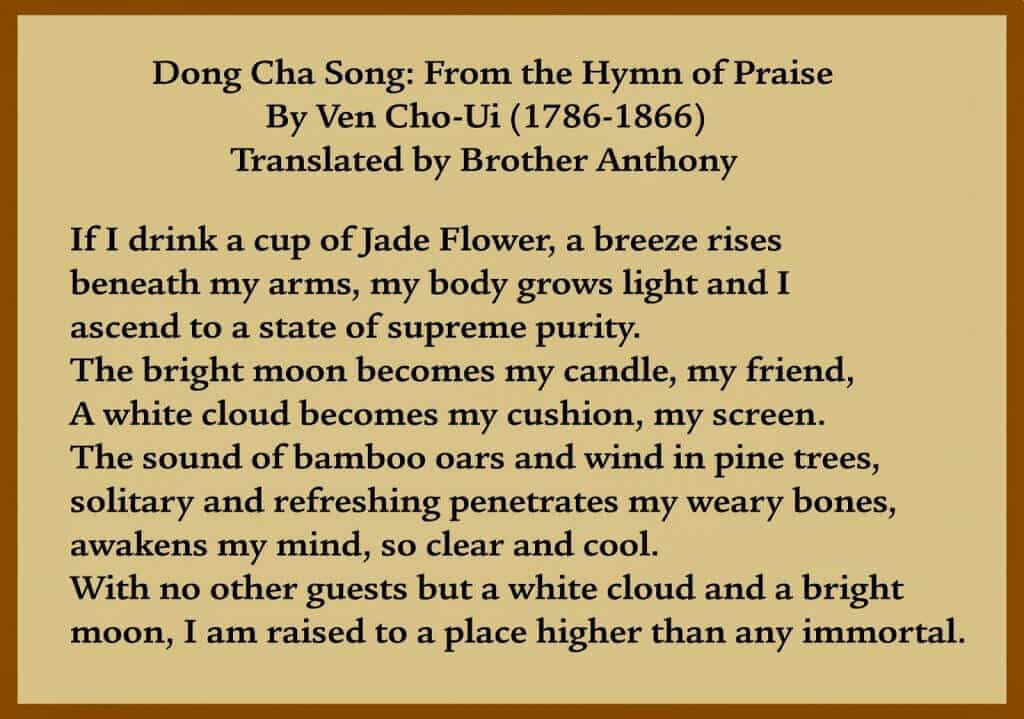 From Dong Cha Song: Hymns to Korean Tea by Ven. Cho-Ui. Translated by the Ven. Jinwŏl (revised by Br Anthony)

Thank you pickers of the tea leaf who in spite of often difficult conditions continue your work beginning the journey of those leaves to my cup.

Go back to Part 1