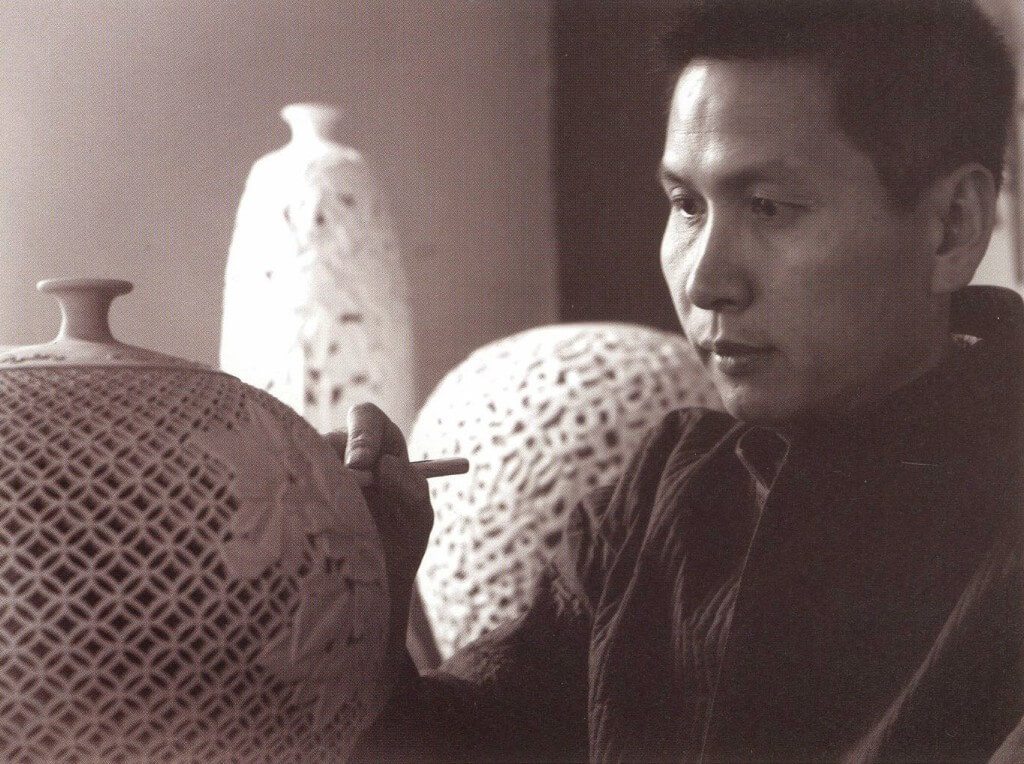 Placing an artist’s work in the context of Korean ceramic history might not or perhaps should not be undertaken with every ceramic artists. Although we as ceramic artists personally perceive ourselves as being innovative or unique we still all stand on the shoulders of those who preceded us. Even with all of the individual innovative work that is being done by ceramic artists internationally it is rare that a contemporary ceramic artist would stand out to the point that such an attempt to place that artist in the context of the ceramic history of that artist’s country could or should be made. Jeon Seong Keun was such an artist. 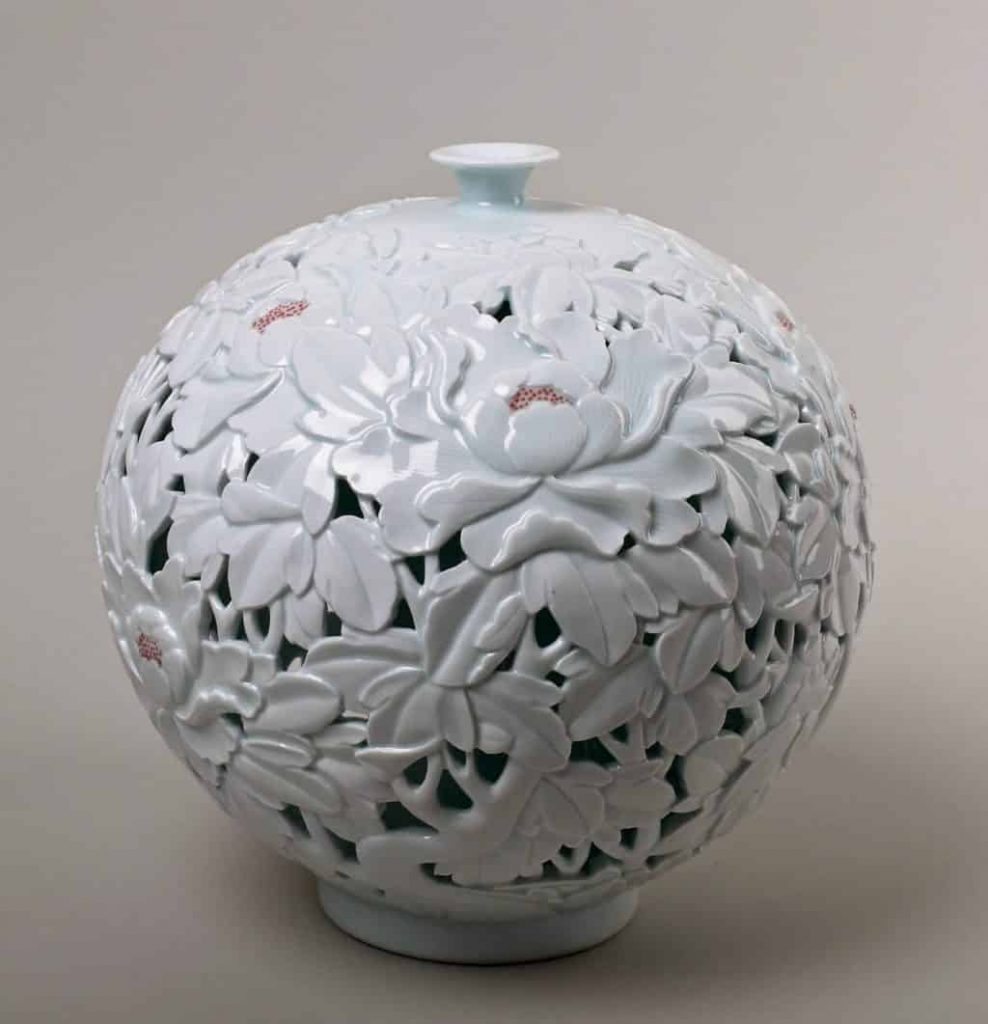 Korea has a long history of ceramic open-work. 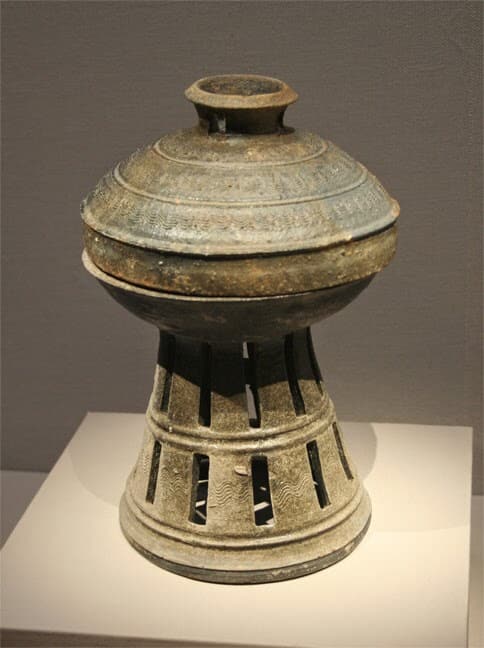 This includes the open work of the 3 Kingdoms Period (삼국시대) (57-BCE – 668 CE abt) of Silla, Baekje and Gogureo and also includes particularly the Gaya Confederacy (42-532 CE). 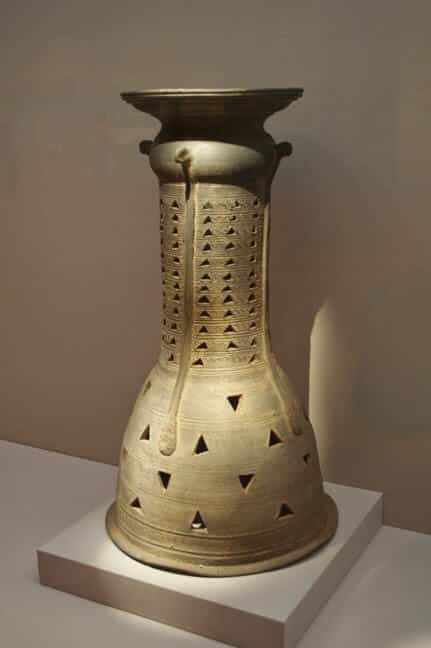 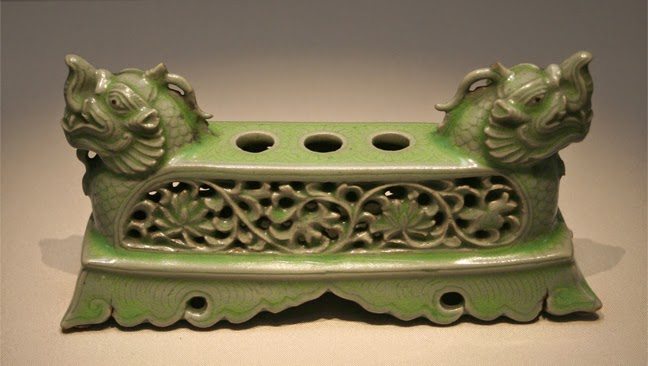 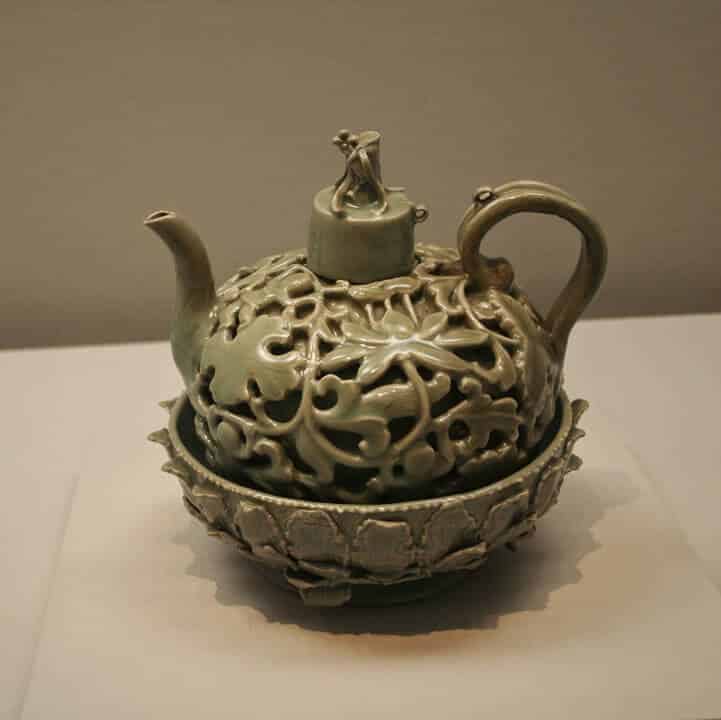 Then came the striking white porcelain openwork of the Joseon Dynasty that inspired Jeon Seong Keun. 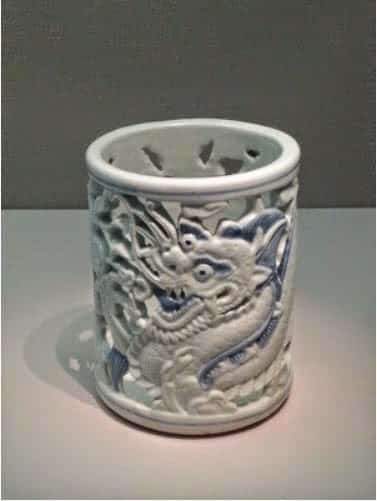 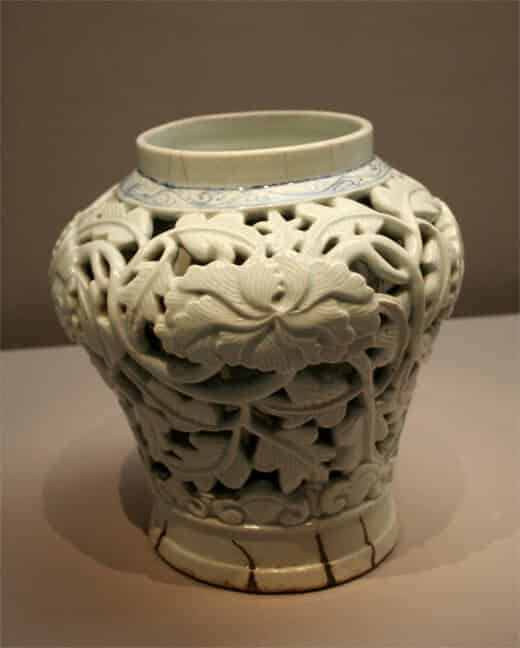 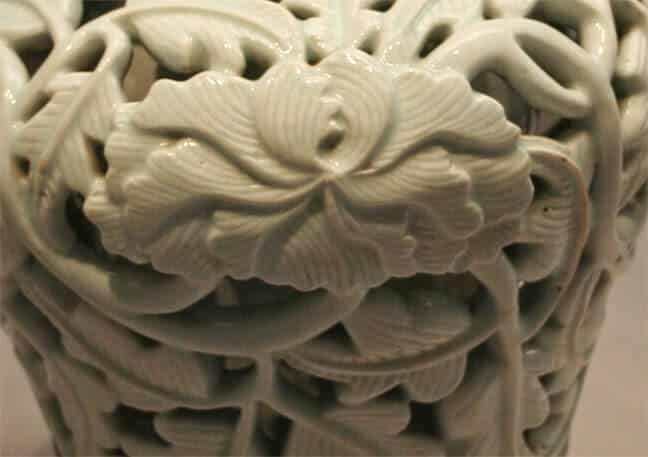 Today, Many Korean contemporary artists include open-work as part of their ceramic repertoire.  Open-work has endured throughout much of Korea’s ceramic history.

Although many Korean ceramic artists are truly masters of open-work, in my opinion, none have mastered the full range of this work, including three dimensional sculptural carving, to the degree achieved by Jeon Seong Keun. 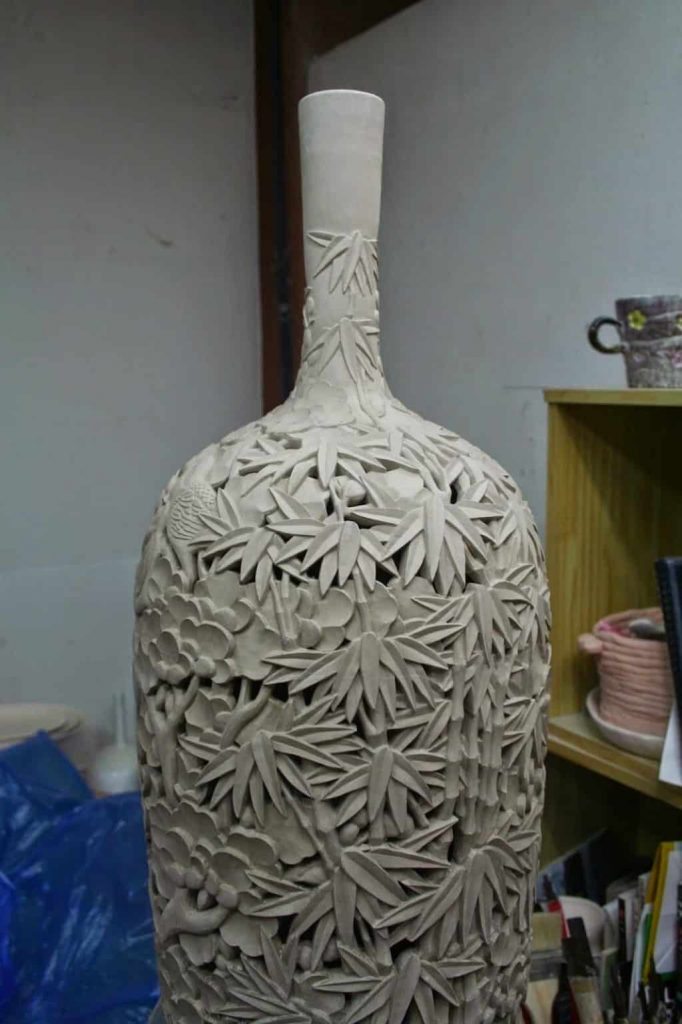 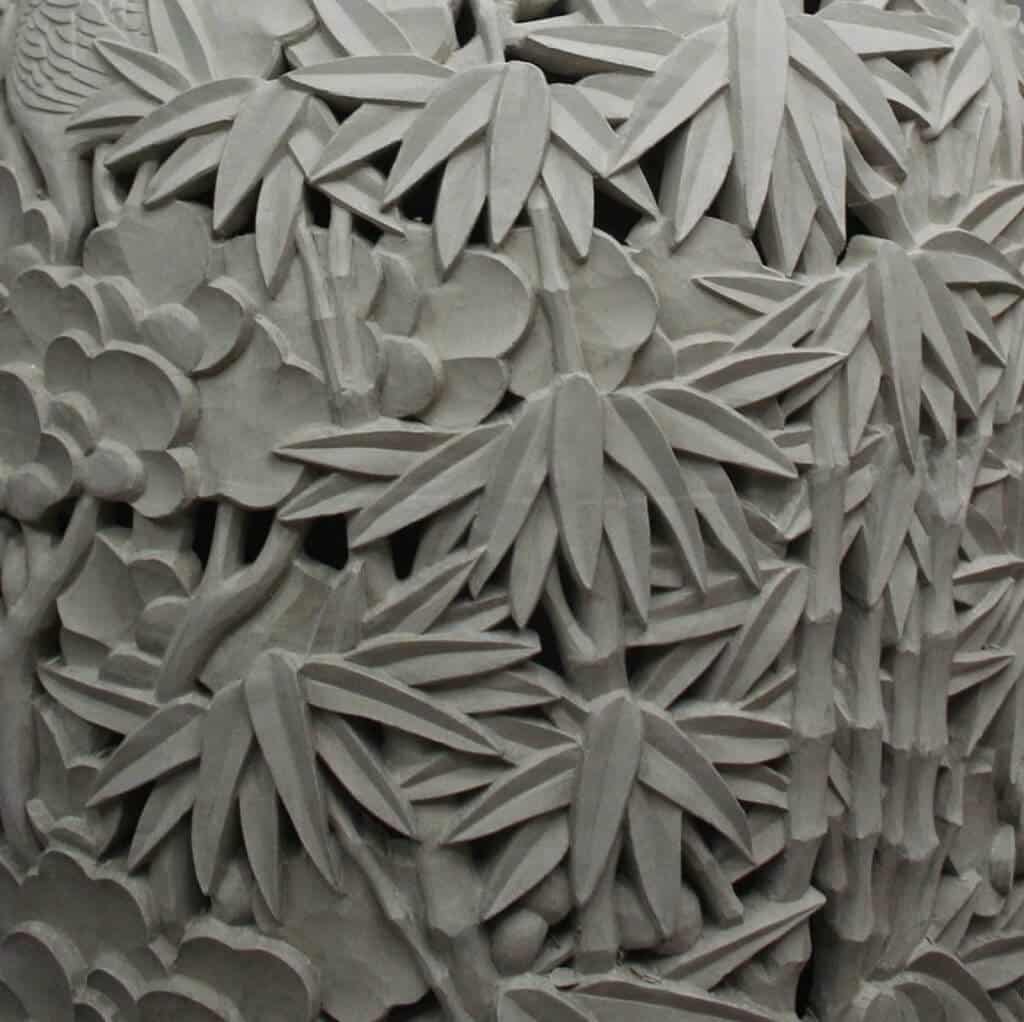 Jeon’s work goes beyond open-work. Regardless of size and shape, highly wrought carving spreads over the whole body evenly in his work. Compared with general open-work, his skill has a striking difference because of the 3 dimensional mass. 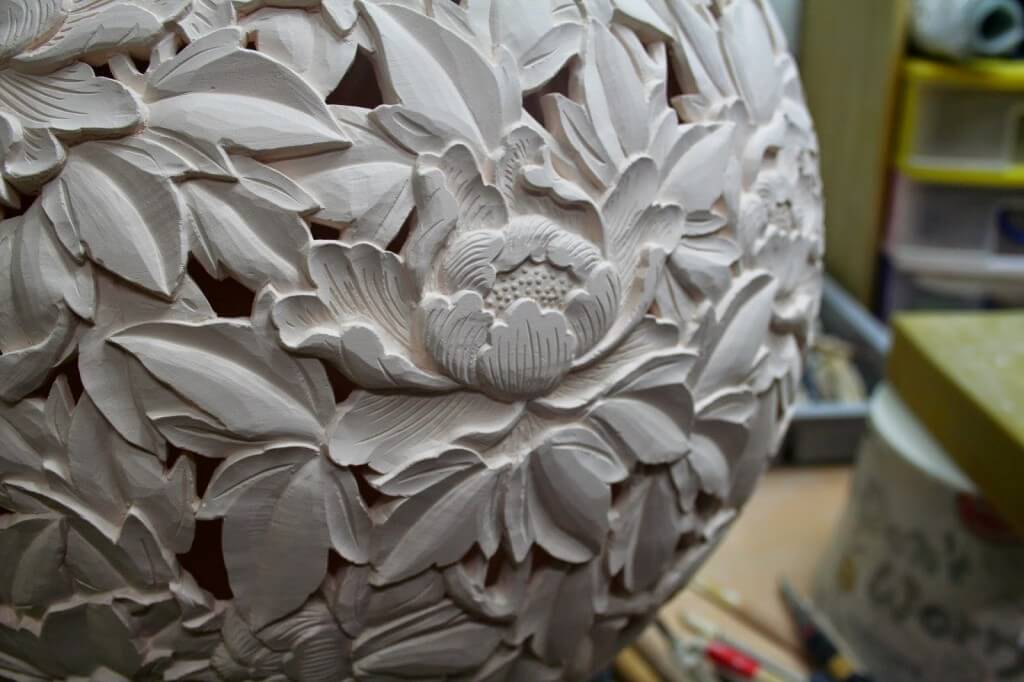 I couldn’t imagine that such a feat was humanly possible. 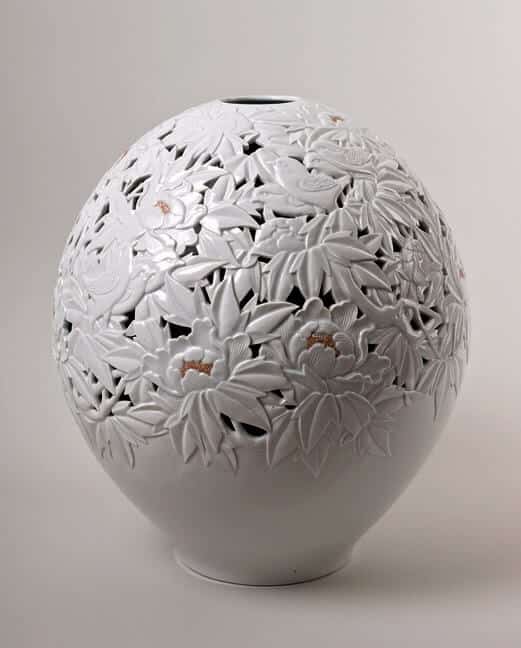 With the combination of traditional open-work skills and sculpture carving skills developed early, when he studied under Korean Intangible Cultural Treasure in woodcarving Park Chan Soo, Jeon Seong Keun was able to take porcelain openwork to another level. We know the techniques gained through woodcarving are not directly transferable to porcelain clay. That transfer Jeon had to do by himself. Jeon Seong Keun was able to master both open-work and three dimensional carving on porcelain, the most difficult of clays with which to work, is as the Italian Possi exclaimed truly unimaginable. 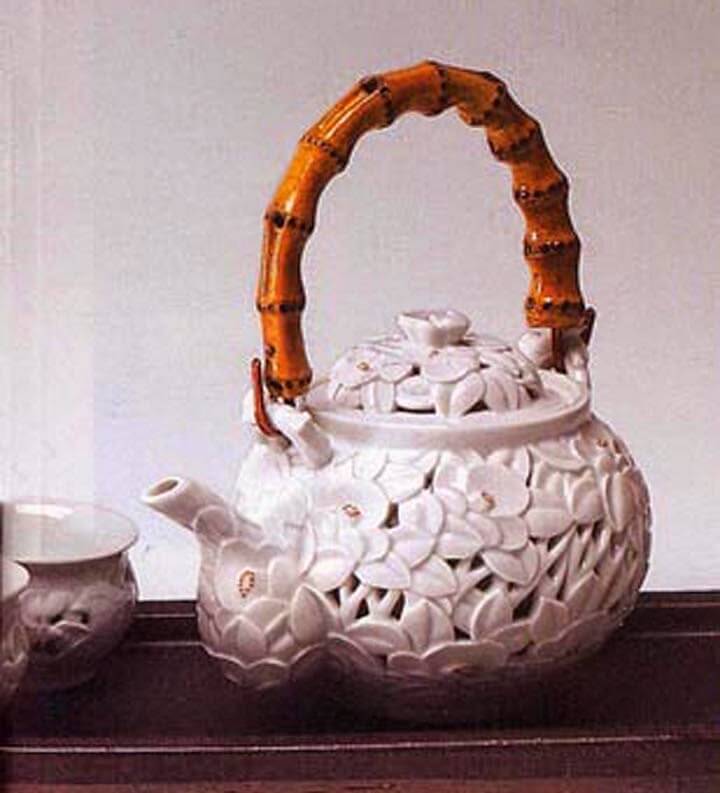 In my opinion, after personally researching Korean ceramics for at least 4 decades, Jeon Seong Keun achieved a level of understanding and skill that stands out as among the finest in Korean ceramic history.
That we have lost him at such a young age is truly tragic.  We join his immediate family in mourning, and are thankful for his life and work.

Note on 4: There is a debate as to the purpose of this type vessel.  Some have suggested it is a wine ewer with warming bowl.  However others argue that the lotus blossom bowl, a symbol of Buddhism would not be used for wine. The drinking of tea was at its height during the Goryeo Dynasty and was enjoyed by all from peasant to palace./

Note on 6: This national treasure sculptural double walled open-work has both slumped and cracked during firing. It is seldom seen from this angle as most often photographers take its image from a angle that doesn’t expose that it has slumped. There is a great degree of loss in firing open-work.  Add to that sculptural open-work with its various degrees of thickness and one is always courting with disaster during the firing. It is one thing to carve sculptural open work in jade that is not drying and shrinking and quite a different thing to carve in porcelain.
Where are the other large open-work vessels made during the Joseon Dynasty?  One must remember that Japan annexed Korea for nearly 50 years during the first part of the last century. In the process they sold thousands of Korean treasures to museums and private collectors world wide and took thousands of pieces to Japan. Only a few remain in Korea.