The Death of Sen Rikyu and the Birth of a Teabowl 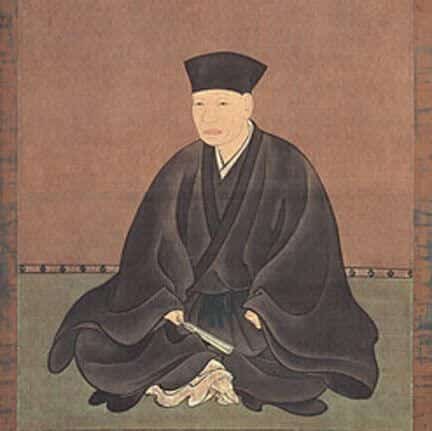 In a single moment he was dead, a victim of seppuku.  Nothing could have prevented it; not the pleadings of Hideyoshi’s wife and daughter, not the intercession of samurai generals and Tea masters alike – nothing.

In preparation for this post I Googled “Sen Rikyu” and found 133,000 entries. (Now in 2013 there are 204,000) What more can be said? I am certainly not an expert on Sen Rikyu, but because he is near the heart of some of those aspects of Tea that interest me most. I have been reading about him and Toyotomi Hideyoshi for many years. To me, the ramifications that followed the death of Sen no Rikyu and their connection to Korea make that instant a key moment in teabowl history.

It is also interesting that of all the things written about Sen no Rikyu, one thing seems to puzzle writers most. Why did Toyotomi Hideyoshi command Sen Rikyu, this great man of Tea, to commit ritual suicide?  In 1989, Japan made a movie to explore this question.  The movie, Sen No Rikyu: The Death of a Tea Master, was highly rated but the question remains. (The movie is available on the web for a price.)
On the 28th day of the 2nd month of 1591 at his residence in Jurakudai, the palace he had helped to build, Sen no Rikyu wrote the following poem, raised his sword and carried out the command.

A life of seventy years,
strength spent to the very last.
With this my jeweled sword,
I kill both patriarchs and buddhas.
I yet carry one article I had gained,
the long sword and now at this moment
I hurl it to the heavens
A Biography of Sen Rikyu, Murai

Welcome to thee,
O sword of eternity!
Through Buddha
And through Daruma alike
Thou hast cleft thy way.
Japanese Tea Ceremony. net

I raise the sword,
This sword of mine,
Long in my possession
The time is come at last.
Skyward I throw it up!
translation: Suzuki Dasetsu

A full ceremonial seppuku always has a death poem. (jisei no ku 辞世の句).  That there are at least three different translations of Sen no Rikyu’s death poem underscores the confusion surrounding his death.
Many have speculated as to why Toyotomi Hideyoshi ordered Sen no Rikyu to commit seppuku (切腹).  You may also be wondering why a blog on teabowls, such as this, would deal with such an issue.

Why did I, on this April day 2010, decide to address this morbid issue and post this blog on Sen Rikyu?  I certainly do not enjoy morose thoughts.
I chose Sen no Rikyu because, particularly in the Western world, we cannot think about Teabowls without thinking about the contributions of Sen Rikyu.  April is the month of Sen Rikyu’s birth – April 21, 1581.  Of course that may be the Chinese calendar.
The death of Sen no Rikyu has intrigued me for years, not because I enjoyed the topic, but because, in my mind, seeking the answer to the question, “Why?” and the aftermath of the deed, are keys to understanding the influence of Korea on Japanese teabowls and indeed Japanese ceramics in general.

So why did the most powerful man in Japan the great Taiko ask his beloved tea master to commit seppuku?
There are many possible reasons. I come to the following possibilities because they have been “collecting” over the years from readings, and discussions with Zen scholars of Japanese history and other learned people. 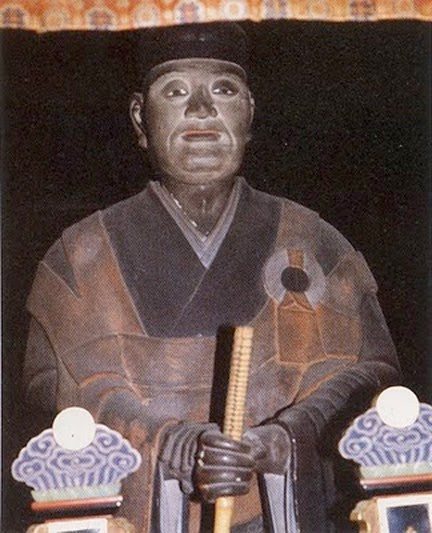 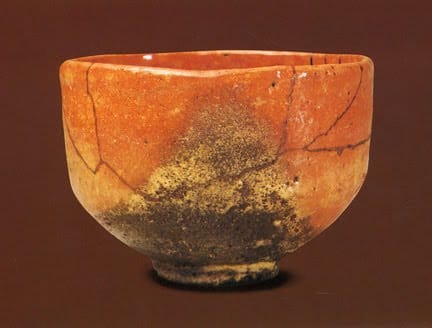 From The World of Korean Ceramics, Jon and Alan Covell

This Raku bowl is by Chojiro.  Since none of Chojiro’s bowls were available for purchase by the public. It is highly likely that Sen no Rikyu used this bowl perhaps while serving Tea to Hideyoshi. The bowl is a great example of Chojiro’s work and the aesthetics of Sen Rikyu’s wabi-cha. Formed by hand and glazed with a simple transparent glaze there is a softness to the feel of this and all Raku bowls that suits them well to Tea.

Since not all of Chojiro’s red bowls have smoke marking, it is presumed that such markings may have initially occurred accidentally after the bowl was withdrawn from the kiln, while the glaze was still molten, and placed on some wood or brush that happened to be on the ground nearby. To quote from the Raku Family web site:

The form achieved in his tea bowls is a manifestation of spirituality, reflecting most directly the ideals of wabi advocated by Sen no Rikyu as much as the philosophy of Zen, Buddhism and Taoism. Chojiro, through his negation of movement, decoration and variation of form, went beyond the boundaries of individualistic expression and elevated the teabowl into a spiritual abstraction and an intensified presence.

Sen Rikyu, in life, helped to give birth to the humble tea bowls we know today as Raku.

On Sen Rikyu’s death, no one remained to argue with Hideyoshi against the invasion of Korea and the devastating Imjin War (Bunroku no eki). That war led to the death of approximately 3,000,000 people in Korea. Far more lives were lost than in any modern war. The stories of that war are horrific beyond comprehension. The war led to the dislocation of somewhere between 60,000 and 90,000 people of all types, men, women, children, scholars, poets and craftspeople of all types including an estimated 2000 potters who set up studios for many warlords in Japan. In the process the Korean potters founded numerous pottery villages. Many of those villages remain in Japan today. In a strange twist of fate it is possible to argue that had Sen no Rikyu not died and had been able to persuade Hideyoshi to not attempt to conquer Korea and China the face of both Korean and Japanese ceramics and specifically tea bowls, would be vastly different today.

Originally I was going to post this on April 1st but decided to postpone it a few days because of the odd significance of that day in the USA – perhaps beyond.  I decided to look once more at the official Raku Family website and discovered that they, on April 1, 2010, had drastically changed their web site from what it had been for many years.  It was a joke on me.  Even much of the information had changed.  It is not my intent to disrespect those who choose the content of the official Raku Family website.  After considerable thought and conscious searching, I decided to present on my post the information I have been collecting on this story for many years. It comes from several sources that have also been doing research on the subject.

Notably one source is now on line in the 1901 book Japan Its History Arts and Literature Vol VIII Keramic Art by Captain F. Brinkley.  Much but not all of his information is confirmed by other authors. Please also compare his Raku family linage on page 36 Japan History with the official Raku site.

If you go to the new Raku Family website, you will not learn that they have any Korean roots. Rather, they report that their roots are part Chinese and discuss evidence to prove it. For many years it has been the practice for Japanese people to deny the influence of Korea on their culture and/or that they might be themselves part Korean. One scholar told me that this practice is like denying the influence of African Americans on Jazz, particularly in the area of ceramics.

Was Chojiro part Korean or part Chinese? Were Chojiro and Jokei actually brothers? Did Sen no Rikyu give his family name Tanaka to Ameya or to Chojiro or not at all?  (Just a few years ago Koreans who lived in Japan and did not change their name to a Japanese name could not own property – even if their family had lived in Japan for centuries.)  In the final analysis, none of the facts of my post really matter. What we can agree on is the importance of the relationship of Sen no Rikyu to Chjiro and Jokei and the birth of a tea bowl that became Raku.

This is simply a blog. It is not a doctorial dissertation nor is it a book, both of which should require much more documentation. It was originally written to help clarify some things in my own mind about Sen Rikyu’s death and the impact on Korean and Japanese tea bowls – not to confuse the history of Raku.  After all the real purpose of this blog is simply to think about and enjoy some teabowls.

The term “Raku” should not be confused with the Western ware inspired by Raku and developed principally by Paul Soldner that we know as “raku”.  After watching Paul Soldner demonstrate his process, the great teabowl master Raku Kakunyu XIV spoke with Soldner and said , “It is an interesting process but it is not Raku.  I am Raku.”   This story came directly from Paul.

While the above Chojiro Raku teabowl is truly a great one. it is not the the bowl that first inspired me to think about writing about Sen Rikyu.  That bowl was a Korean  Goryeo Dynasty celadon bowl that I did not include in my last post.  This celadon bowl was officially documented as having been used by Sen Rikyu.  Japan keeps very extensive records on official tea ceremonies.  Reportedly Korean bowls were used the majority of the time. 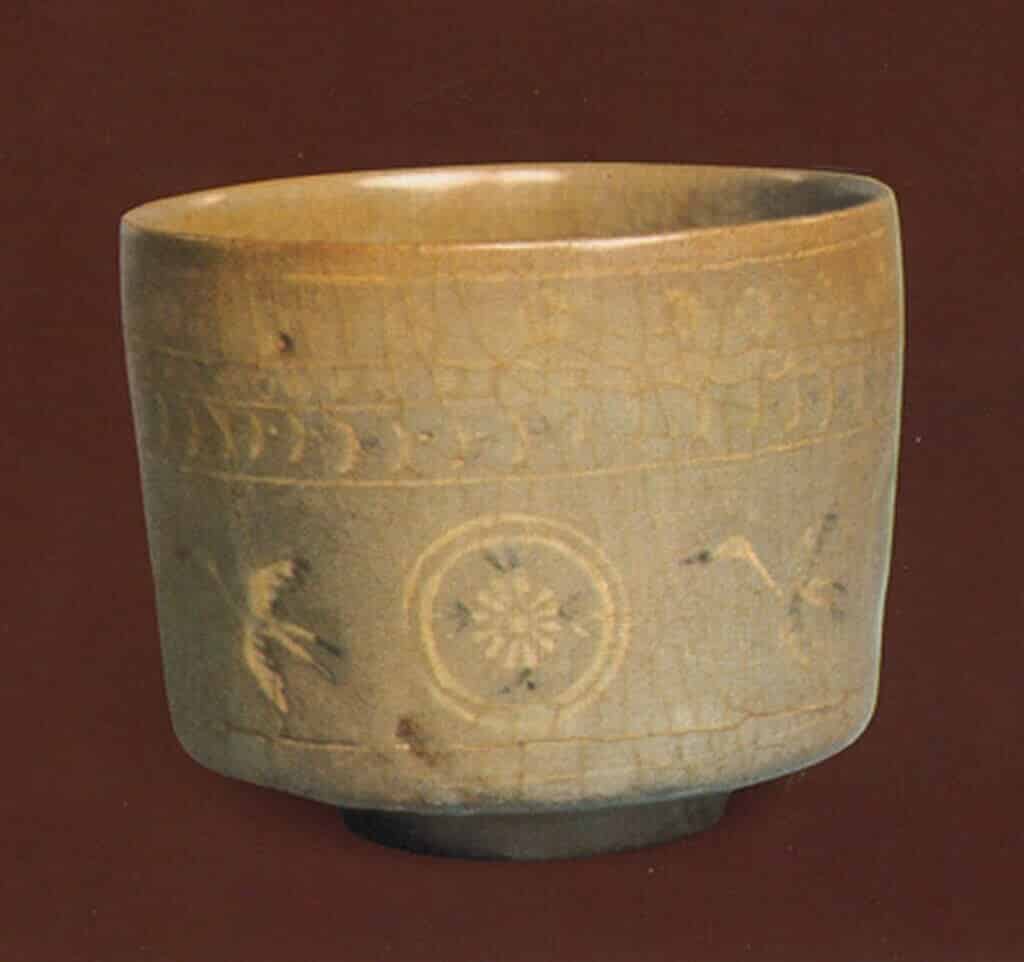 From The World of Korean Ceramics, Jon and Alan Covell

Known as the Naniwazutsu, this celadon bowl is very different from those on my celadon teabowl post. First it is not an ‘open’ form but is upright.  Celadon was made throughout Korea during the Goryeo Dynasty and although many of the “finest” celadon came from Gangjin it is immediately clear from the crackled glaze that this piece does not come from Gangjin.  This bowl is too unrefined.

That is how it should be for a Sen no Rikyu bowl. Although Goryeo celadon is known for its sophistication.  There is something about this Goryeo bowl that remains humble. Is it the slightly pock marked surface with its partially under-reduced tea stained crazed glaze or the innocently carved and inlaid ‘sang hwa mun‘ cranes, ironic symbols for long life – while Sen Rikyu’s life was shortened?  Is it the simple stamped chrysanthemum a symbol for cheer and optimism – and an object for meditation?  Or is it the off-center form that we know fits the hand perfectly?

The Naniwazutsu feels like a bowl that is for quiet personal contemplation and meditation, not a bowl to be shared.  I wonder if Sen no Rikyu used it in that way?

It is also one of those rare chawan that seems like a cross between a chawan (teabowl) and yunomi (watercup) in Japanese.  Many Western potters don’t seem to understand or ignore the difference. That is a topic for another post.
In any case, I hope you enjoyed this post. Your comments and suggestions are encouraged and welcome.

Special thanks to Alan Covell for permission to post the photos from his books and the insights those books have been giving me.  Dr. Jon Carter Covell, Alan’s mother was a close friend. We miss her insights into Japanese and Korean culture greatly.

Share on:
« Previous PostConnecting The Kizaemon Ido With the Potter Next Post »Picking Tea in Korea: Part 1